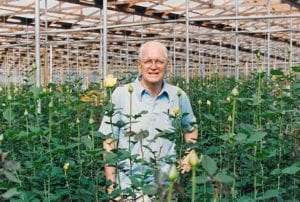 James “Jim” Nordlie passed away on July 1, 2016 at the age of 93.
Kennicott Brothers Co. and The Pete Garcia Co. both contributed $1,000 to establish this new memorial tribute.
“I have had the pleasure of knowing Jim Nordlie since the late 50s. His personality, drive and traits helped me establish goals for my future. He will be missed,” said Pete Garcia, Chairman of The Pete Garcia Company.
Nordlie was born on Jan. 12, 1923 in Detroit, Mich. and received a business degree from the University of Michigan. After graduation and his return from military service in World War II, he joined Nordlie Inc., a Michigan-based family wholesale floral business.
Under his leadership, Nordlie Inc. expanded to seven stores in Michigan, Ohio and Florida. The company merged with Kennicott Brothers Co. in 2014.
“Jim Nordlie dedicated his life to the flower industry,” said Red Kennicott, Chairman and CEO of Kennicott Brothers Co.
“His integrity and dedication to his employees and customers have been an inspiration to me for many years. It has truly been an honor for Kennicott Brothers Company to have become associated with Jim and Nordlie Inc,” he said.
Having a passion for roses, Nordlie managed two rose-growing greenhouses in Ohio and two rose farms in Guatemala. He also served as President of the Wholesale Florist and Florist Supplier Association from 1966-1968.
His dedication to the floral industry earned him many awards and honors throughout his lifetime, including the Leland T. Kintzele Distinguished Service Award in 1988, as well as induction into the Michigan Floral Foundation Hall of Fame in 2011. Nordlie was admired by employees, customers and colleagues throughout the industry.