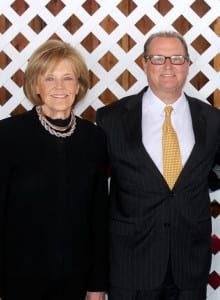 Past AFE Chairman Jim Leider suffered the losses of his wife and son this year, first with the death of Peggy who passed away on March 23, and two months later with the death of his and Peggy’s oldest son Michael, who died on May 24.
Peggy succumbed to a long battle with cancer at age 76, and Michael, age 54, also passed away after a brief but painful battle with cancer.
“Both Peggy and Michael have given a tremendous amount of support to the industry, side by side with Jim Leider. This is our way of honoring their legacy, by also allowing others to give back to the industry they love, in their names,” Ken and Randy Tagawa said in a joint statement.
Peggy first met Jim at Cornell University, and later moved to Chicago to marry him. She was a major supporter of the family greenhouse business, Leider’s Greenhouses – a 117-year-old greenhouse operation based in Buffalo Grove, Ill. She raised her family in Deerfield, then moved to Lake Bluff to be closer to her grandchildren, and eventually settled down in Ocean Ridge Fla. with Jim. Peggy was proud that her children and grandchildren were carrying on the family business to the 5th generation.
Peggy was a member of several organizations, including the Chicago Botanic Garden Women’s Board, Ravinia Festival Women’s Board and the Northwestern University Women’s Board. Some of her many hobbies included golfing, gardening, playing bridge and traveling with her family and friends.
According to the obituary written by his son, Michael Leider was born in Bloomington, Ill., raised in Deerfield and lived in Lake Bluff for most of his adult life. He graduated from the University of Illinois with a degree in Ornamental Horticulture in 1982, and studied and worked in the Netherlands after graduation. He eventually returned home in order to gain more experience and advance his skills.
Throughout his career in the horticulture industry, Michael developed many close relationships. He contributed to various projects at the Chicago Botanical Gardens as a wholesale plant supplier, and most recently sourced all of the plants for the February Orchid Show. Michael loved animals, nature, camping, working in his garden and many other outdoor activities.
Ken Tagawa established the tribute with a $1,000 contribution, and has donated an additional $2,000 to the fund.

Memorial tributes are a way to remember and honor industry members, family and friends in a special and lasting manner. A $1,000 contribution establishes a tribute. Once established, contributions can be made in any amount, and the family is always notified of a donation.