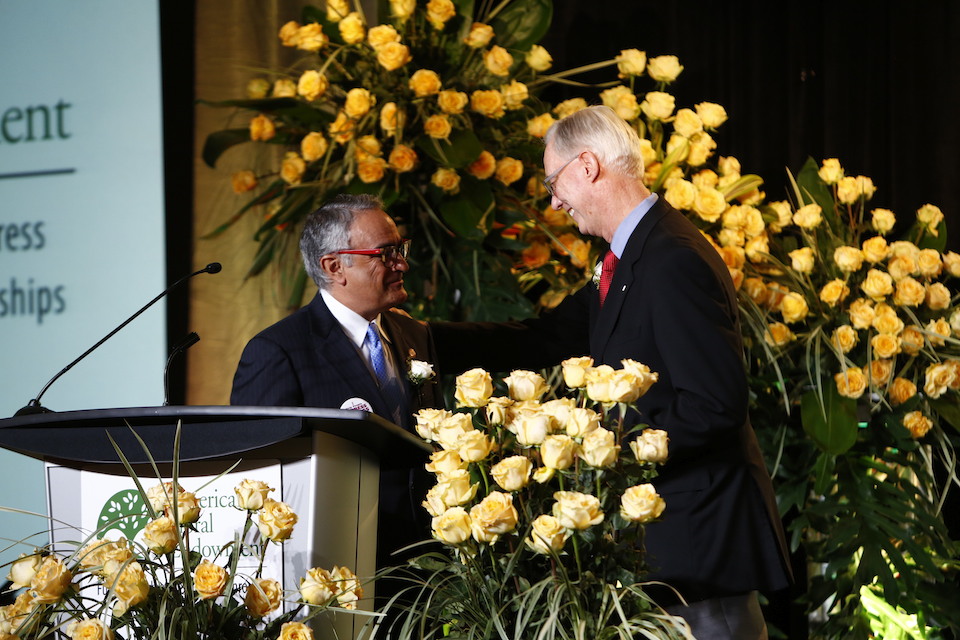 AFE’s Annual Fundraising Dinner held on Aug. 14 was blooming with excitement, including industry updates, the announcement of five new named funds, donor recognitions, the passing of the gavel and more.   The dinner, attended by more than 250 industry members, was held in conjunction with the Society of American Florists’ Annual Convention in Marco Island, Fla.

As the centerpiece of the evening, AFE announced five new named funds: 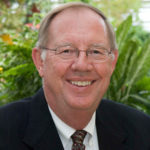 Todd Bachman served as chairman and CEO of Bachman’s before his untimely death in 2008.  A past chairman of AFE, he is remembered as a great communicator and for his outstanding leadership and devotion to work and family. 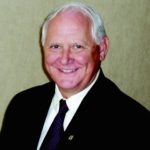 The Del Demaree Family Fund – $250,000, which will establish an internship program to market the industry as a viable career path to attract top collegiate talent with a concentration in business

Delmar “Del” Demaree served as AFE chairman in the early 1990s and has an unsurpassed commitment to the industry. Chairman of Syndicate Sales, Inc., he has earned the respect of his peers throughout 60-plus years in the industry.

The Pennock Company, with more than 200 associates in eight locations, is a premier wholesaler serving the Eastern Seaboard with a full selection of cut flowers, floral containers and supplies and specialty items.

Industry leader and AFE champion Tom Butler was a past chairman of AFE who began his distinguished career in the industry more than 44 years ago. He established this unrestricted fund to support AFE’s programs in July before passing away on Aug. 14. 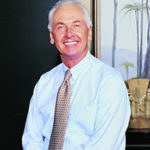 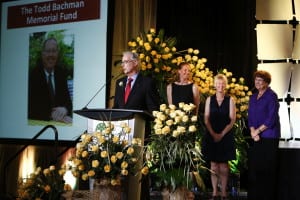 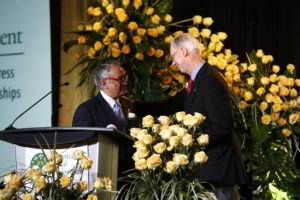 Founders Club(more than $10,000 in giving)
Fresca Farms
Kremp Florist
The Queen’s Flowers
The dinner marked the close of Paul Bachman’s two-year term as chairman, and he passed the gavel to AFE’s incoming chairman, Golden Flowers’ President Gabriel Becerra.
“We will continue placing emphasis on finding ways to attract young people to our industry, as well as on promoting collaboration among our different associations,” Becerra said. “Our goal is to help build a stronger future for everyone involved in our wonderful industry.”
Additional dinner highlights:

The dinner would not be possible without the support of dinner sponsors who lend their names and financial support to the event. Sponsorships help AFE offset the fundraising dinner expenses, allowing more funding for research, grants and scholarships. A special thank you to the 2014 dinner sponsors for their strong commitments to AFE and for helping to make the 2014 dinner a success!
Photos from the dinner are available online or by contacting Suzanna McCloskey, AFE manager of communications and media.