Keep Calm and Grow On: Research to Prevent Plant Stress and Stressors Before they Happen

Stress-free plants = less stress for growers and retailers. Two AFE-funded research projects from scientists at the University of Georgia are currently underway that investigate new ways to detect and reduce plant stress from abiotic pressures and diseases before they happen.

These two projects, providing valuable insights to growers, are funded through AFE research funding. This funding is only possible with generous contributions from our supporters. If you would like to help us as we continue to tackle tough industry challenges facing floral and nursery growers, consider making a contribution as the end of the year approaches at endowment.org/donate. Let’s strengthen the future of the industry together.

Here’s what the researchers have to say after this past year of funding:

Updates from year 1
Greenhouse and nursery producers face a wide range of abiotic (fertility, temperature, lack of water, etc.) and biotic stresses (pathogens, insects) that can negatively impact crop production. Early detection of these stresses is important to mitigate negative impacts on the crop. Such detection typically depends on the visual inspection of crops by an experienced grower. However, stresses can only be detected after symptoms are visible. Earlier detection of potential problems would be beneficial: the sooner a production problem can be addressed, the smaller its impact will be.

Our research uses a multispectral imaging system to determine chlorophyll fluorescence intensity (CFI). All photosynthetic organisms contain chlorophyll, which fluoresces. What that means is that a small fraction of the light that is absorbed by plants is given off again as red and far-red light. Yes, plants literally glow. We can’t see it, because the fluorescence is too weak (only 1 – 2% of the light that hits the plant), but it is easy to photograph. We light plants using blue LEDs and then take a picture through a filter that allows only red and far-red light to pass through the lens to the image sensor. The result: an image of the light produced by the plant. We also take pictures of the plants under red and infrared light and use these images to calculate the Normalized Difference Vegetation Index (NDVI, a common index of plant vigor or greenness). We found that higher fertilizer results in higher CFI and NDVI values, as well as more uniform NDVI values throughout the entire canopy (figure 1).

Next year, we plan to correlate imaging data with traditional plant nutrient analysis data, further investigate CFI as a way to investigate heat and cold stress, and develop an improved, open-source CFI/multi-spectral imaging system that can be assembled by non-specialists for as little as $500, with detailed instructions for hardware assembly and freely-available software. 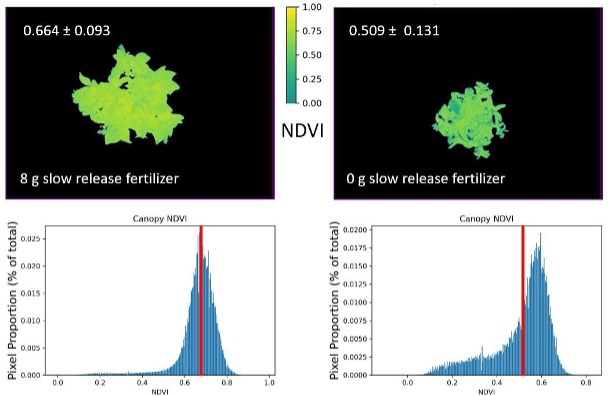 Figure 1. Chlorophyll fluorescence intensity (CFI) images were taken of petunia plants grown with or without fertilizer. You can see the CFI is much higher for the fertilized plant. CFI was also used to calculate the normalized difference vegetation index (NDVI). The histograms on the bottom show the distribution of NDVI values of the entire plant. The red line indicates the average NDVI value. 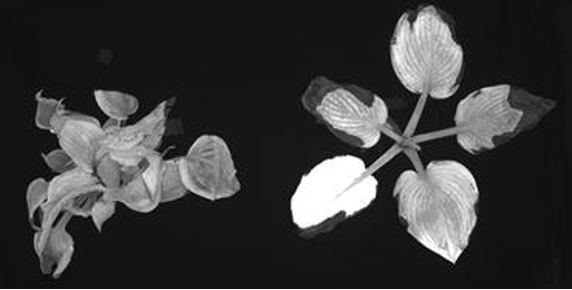 Figure 2. Chlorophyll fluorescence image of two hosta plants after exposure to 23°F. The brightly fluorescing leaf, circled in red, was the only leaf to sustain serious damage.

Updates from year 2
This project investigates the use of gene editing to improve floral crops. Our research will benefit the industry by developing gene editing methods for floral crop improvement. The ability to confer disease resistance through CRISPR technology is being examined in gerbera cultivars in the marketplace, which is not a model genotype. This complicated the research, but the results should be more relevant to implementing this technology by the floriculture industry to other floral species. In the last year, our efforts were concentrated on four areas: shoot multiplication, induction of organogenesis and somatic embryogenesis, genetic transformation, and CRISPR construct design.

Organogenesis and Somatic Embryogenesis
To produce transgenic and gene-edited plants, efficient methods for regenerating gerbera shoots from tissue culture are required. We are also pursuing somatic embryogenesis, an alternative approach to regeneration, because embryogenic tissue is a good target for biolistics (directly delivering DNA fragments into cells using a gene gun) and transgene-free gene editing. To these ends, we were able to determine the most effective shoot induction treatment for petioles and leaf blades of Gerbera ‘Flori Line Maxi Yellow’ and Majorette ‘Pink Halo,’ and potentially embryogenic callus was induced from Majorette ‘Pink Halo’ with 2,4-D.

Genetic Transformation and CRISPR Constructs
To determine how to introduce desirable genes (ultimately powdery mildew resistance, in this case), we use what are known as marker genes. These are foreign genes introduced whose expression provides an easily identifiable trait that lets us know that a particular cell can be transformed. There are two types of marker genes, selectable markers (commonly antibiotic or herbicide resistance) and visual markers (fluorescence or blue coloration). Selectable markers kill all but the transformed cells, while visible markers give you visual confirmation of gene transfer. We found that the hygromycin B phosphotransferase gene (HPH) was the best selectable marker for the cultivars we worked with, as opposed to other selectable markers previously used in the literature. In addition to the HPH marker, we introduced a green fluorescent protein (GFP, a visual marker commonly used to indicate transgene expression) transgene into leaf explants of ‘Flori Line Maxi Yellow’ using Agrobacterium tumefaciens C58 in a series of multi-factor experiments. GFP expression could be observed in multiple sites across our leaf explants after two weeks (as indicated by the bright green fluorescence in figure 2), indicating stable transformation. In the presence of 0.1 mg/L IBA and 2.0 BAP mg/L, regenerating tissue was obtained that expressed GFP. The GFP-expressing plants will be validated by analysis, and CRISPR constructs will be introduced. 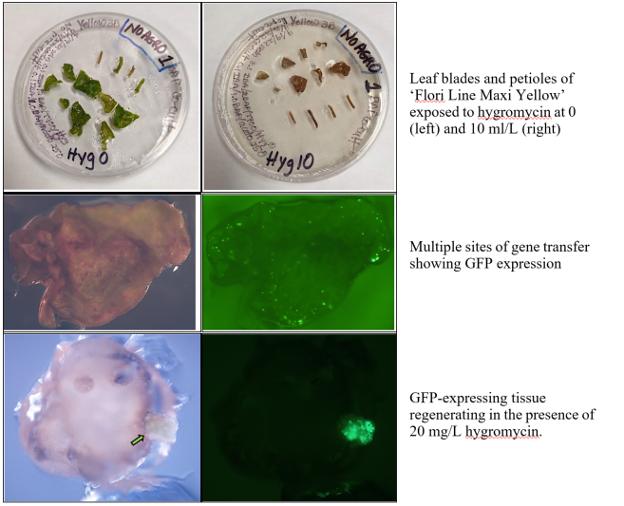