In the past decade, “flowering” LED lamps with custom light spectra including red (R) + far-red (FR) light have been commercially available for flowering applications, albeit at high prices. A more affordable option may be white LED lamps, which are mass-produced for general use. Developed for human vision, white LED lamps emit mostly visible red, green, and blue light, but little FR light. There are pros and cons to both, in addition to cost considerations. “Flowering” LED lamps with FR light can result in rapid flowering of some crops like petunia, but may also cause undesired stretching. White LED lamps may be less effective at promoting flowering than LED lamps with FR light, but may produce plants that are more compact. 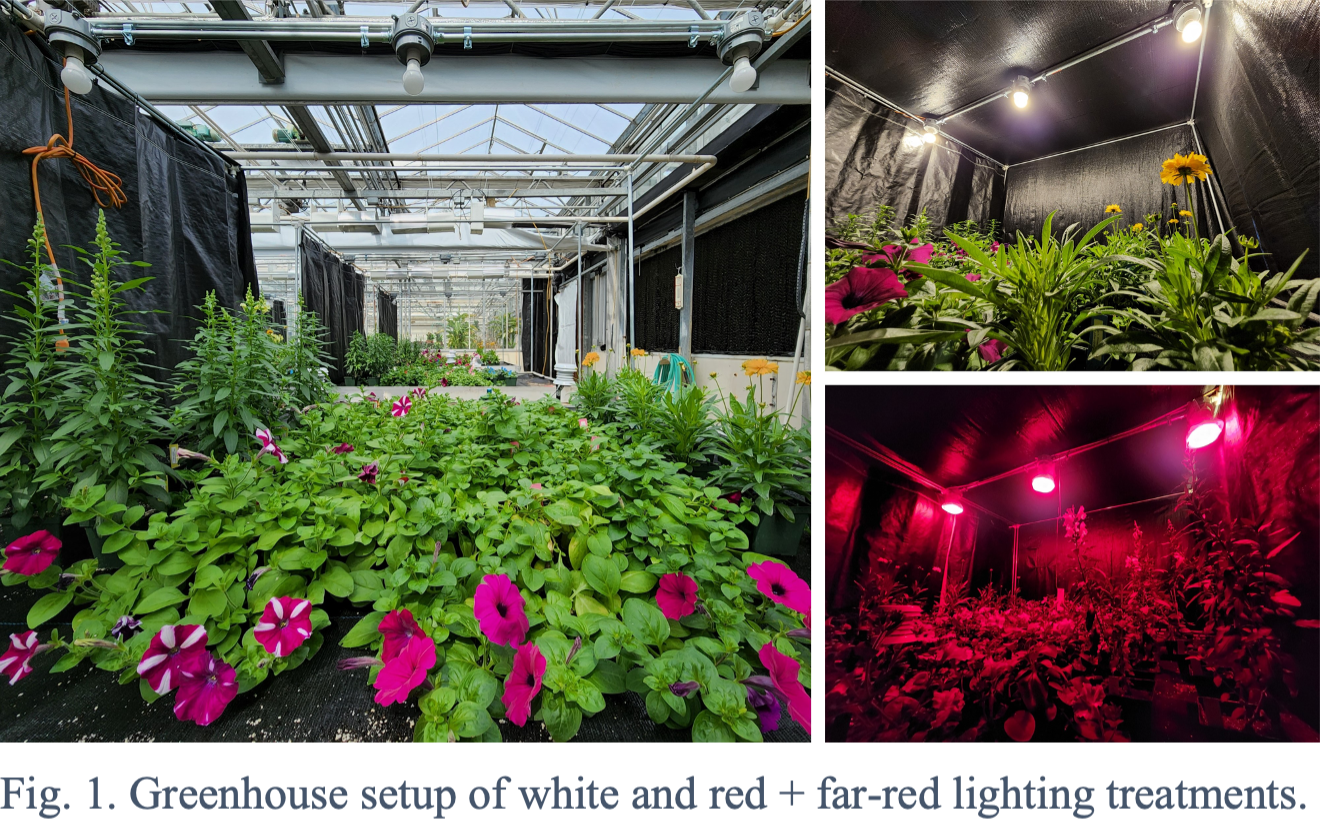 Plants can be sensitive to R or FR light during different parts of the night, so timing may also play a role in how effective white LED lamps can be at controlling flowering. To investigate the efficacy and optimal timing of white vs. R + FR LED lamps, we performed, and then repeated, an experiment on four long-day plants: coreopsis ‘Early Sunrise,’ snapdragon ‘Liberty Classic Yellow,’ petunia ‘Easy Wave Burgundy Star,’ and petunia ‘Wave Purple Improved.’ We transplanted seedlings into 4-inch pots filled with peat-perlite media and grew them in a greenhouse under nine lighting treatments (Fig. 1). We grew plants under 8-hour short days (control, truncated with black cloth) with or without white or red + far-red (1:1) LED lamps operating for 8 hours after dusk, 8 hours before dawn, 4 hours after dusk + 4 hours before dawn, or 4 hours as a night break(Fig. 2). A digital timer controlled the timing of each lighting treatment. We used layers of aluminum mesh to cover the R + FR LED lamps so that light intensity was similar across all treatments at around 2 μmol·m−2·s−1 with all colors included. 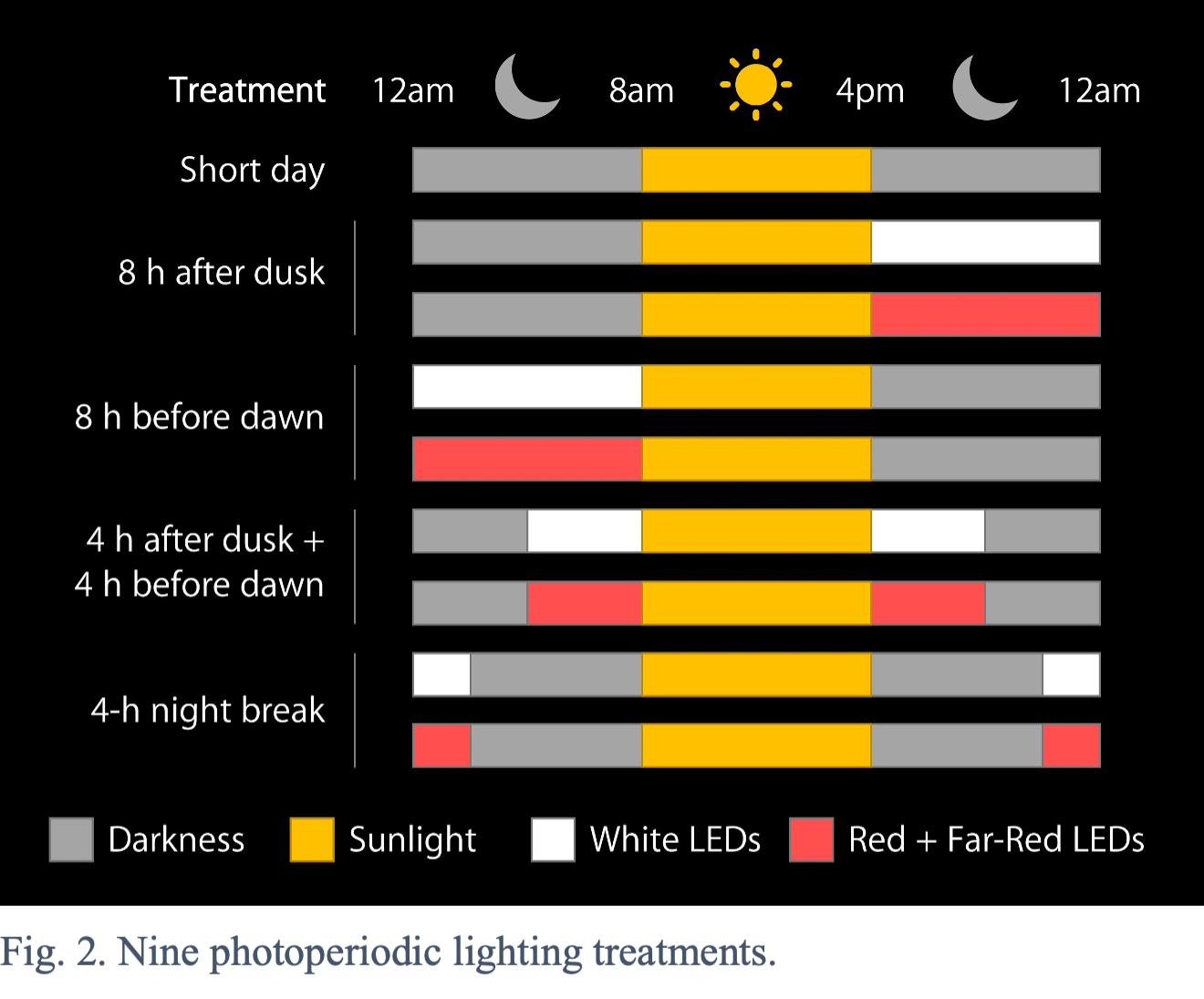 Coreopsis ‘Easy Sunrise’ Plants did not flower under short days but flowered similarly under all lighting treatments (Fig. 3). At flowering, plants grown under white LED lamps were 18%–19% shorter than those grown under R + FR LED lamps.

Petunia ‘Wave Purple Improved’ Plants flowered earlier under all lighting treatments compared to short days. For 8-hour post-dusk and/or pre-dawn lighting, plants grown under white LED lamps flowered 13–14 days later compared to R + FR LED lamps (Fig. 3). However, flowering was similar under both lamp types when delivered as 4-hour night-break lighting. For white LED lamps, the light timing did not matter, but under R + FR LED lamps, flowering was faster under 8-hour post-dusk lighting than under 4-hour night-break lighting. Branching was similar under all lighting treatments. 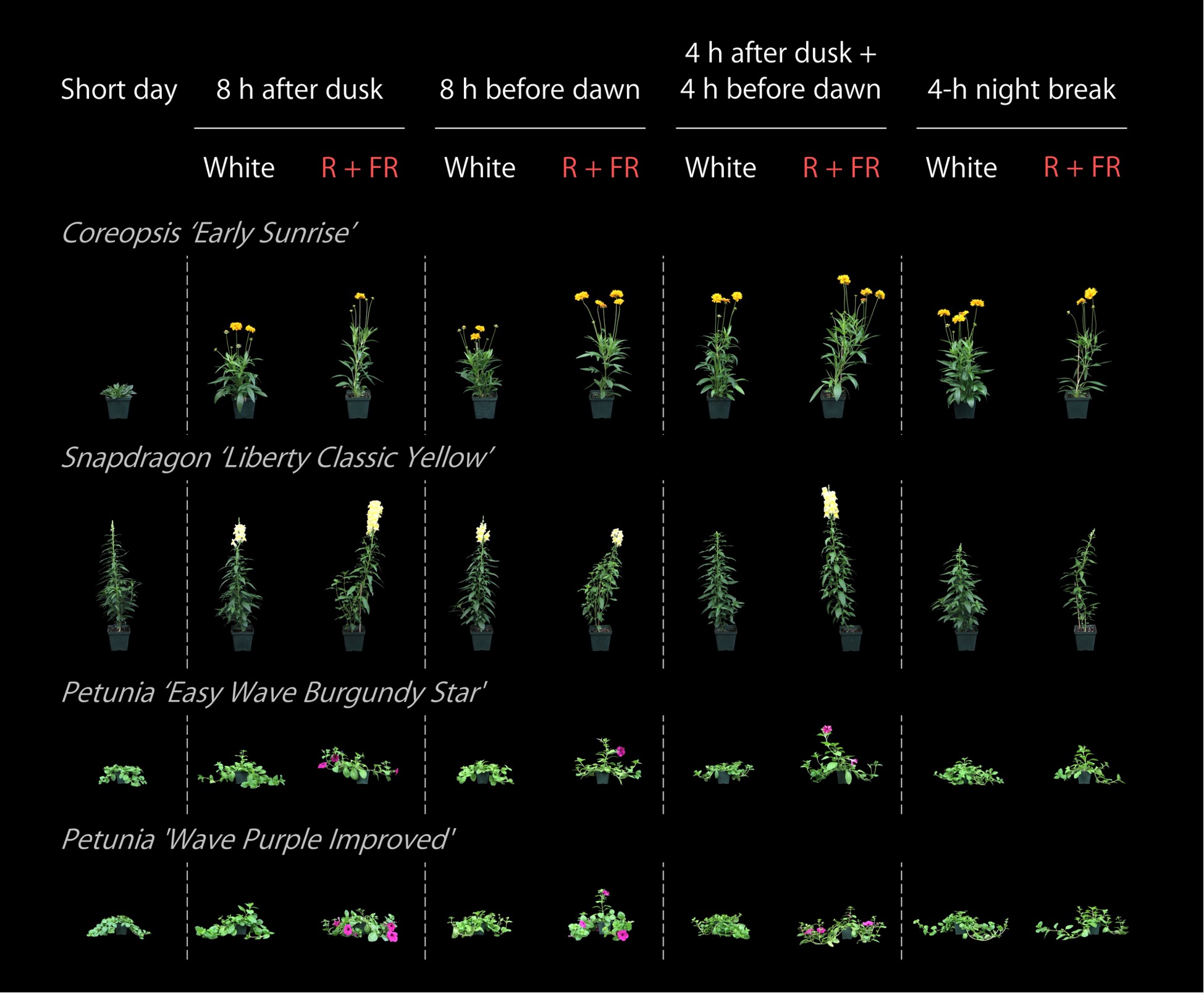 Our results show that while white LED lamps may not produce flowers as early in FR-sensitive crops such as snapdragon and petunia, they show the potential to improve compactness and branching. They may be a cost-effective photoperiodic lighting option for plants such as coreopsis, that when grown under white LEDs were shorter and flowered similarly to those grown under R + FR LEDs. As for the optimal timing of the different lamps, we found that for white LEDs, flowering of all crops was the earliest when operated for 8 hours before dawn. For R + FR LEDs, 8-hour post-dusk and/or pre-dawn lighting was generally more effective than 4-hour night-break lighting.

We thank the American Floral Endowment for funding, Raker-Roberta’s Young Plants for plant material, TotalGrow Lights for R + FR LED lamps, and the University of Delaware greenhouse staff and students for technical and experimental assistance.

By Qingwu (William) Meng, Department of Plant and Soil Sciences, University of Delaware