To LED or Not to LED 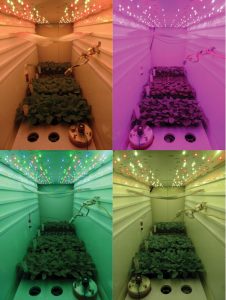 Light-emitting diodes (LEDs) have captured the interest of a lot of greenhouse growers as well as academics. One of the best ways to exploit this lighting technology is to grow young plants indoors. Here, we have full control of the growing environment. While LEDs have rapidly advanced, especially in the last five years, we still have more questions than answers. With support from American Floral Endowment, we have expanded our understanding of how different light wavebands (or colors) regulate growth. This includes plant architecture, leaf color, and flowering time across a range of floriculture species.

Earlier this year, we wrote a five-part series in GrowerTalks magazine, in collaboration with colleagues at the University of Florida. In the first article, we discuss the concept of growing plants indoors. We present some of the most important considerations when selecting an indoor lighting system. These include the durability of the lighting fixture, the light intensity and uniformity to be delivered, the energy efficiency of the fixture, and of course the cost to purchase and install a system.

In the second article, we present research-based information on how total light intensity and the intensity of far-red light interact to influence the growth of seedlings and flowering after transplant. We demonstrated that far-red light promotes seedling growth of seedlings, but in some crops, the effects were stronger under a lower light intensity than a higher one. In the third article, we show how blue and far-red light interact to influence growth. Simplistically speaking, blue light inhibits extension growth and acts as a growth retardant. In contrast, far-red light increases extension growth and acts as a growth promoter. We learned that blue light suppresses the promotive effects of far-red light on extension growth. Our fourth article presents results from yet another experiment. In this one, we determined recommended minimum intensities of blue and far-red light to produce moderately compact seedlings without delaying subsequent flowering of long-day plants.

The last article of our series discusses the economics of growing young plants indoors.  Included in this article are example costs for a single shipping cart with shelves fitted with LEDs and a fog system. The initial capital investment costs and operating costs are presented, which allows you to evaluate profitability from indoor growing. Crops that have high value, are small in size and have slow rooting and/or a high shrinkage rate are excellent candidates for indoor production.

View articles in the series

All articles in this series were originally published in the Grower Talks Magazine.