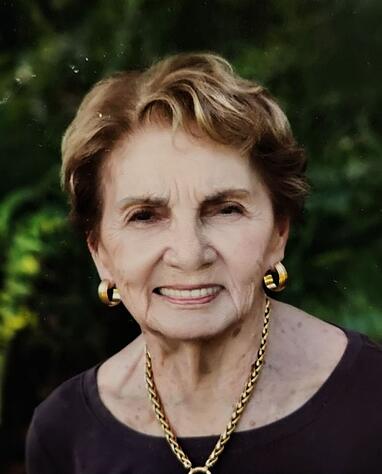 Sarah was the matriarch of the family and dedicated her life to making a warm and welcoming home for her family. As a devoted mother of five children, Richard Armellini (Raynel), Judith Dusharm (Sterling), William Armellini (Gabriele), Stephen Armellini (Kristine), and David Armellini (Patricia). Sarah had thirteen grandchildren, twelve great-grandchildren, and many nieces and nephews.

Sarah was an avid cook, artist, seamstress, and collector of hat pins, and in January 2019 she wrote and published “The Armellini Journey”, the history of the family. Holidays were filled with traditions that Sarah passed along the way, most famous were her homemade ravioli and for dessert, an Italian tradition of homemade pizzelles, biscotti cookies, and torta.

Sarah was a 1940 graduate of Vineland High School in New Jersey and a 1945 graduate of St. Mary’s School for Nursing in Philadelphia, Pennsylvania where she earned a Registered Nursing Degree. Hometown sweethearts of Vineland New Jersey, Sarah and Jules were married on February 4, 1945. Soon afterward, Jules and Sarah formed what has become Armellini Express Lines that was started in 1945 in Vineland, New Jersey. The company has grown to become the largest floral trucking distributor in the United States.  In 1978, they moved their family to Stuart, Florida where they became acquainted with many of the local Stuart, Florida flower growers and opened their corporate headquarters where it is still in operation today in Palm City. Their company has been instrumental in the development of importing, transportation, and distribution of fresh-cut flowers throughout the United States from their Miami base facility with floral imports coming from South America.

Additional information can be found here.