How To Succeed by Thinking Beyond “Success”

First in a series honoring members of AFE’s Legacy Circle. Created to recognize persons who have made provision for a planned gift to AFE, the Legacy Circle celebrates their significant contributions, enriching our past and securing our future. For more information, contact Debi Chedester at (703) 838-5211 or visit endowment.org/legacy-circle. 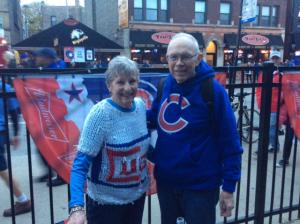 Running a business day to day, it’s not easy to keep an eye on the big picture. And, in this age of global commerce and electronic communications, it can be challenging to build and maintain the person-to-person relationships that sustain a healthy business—especially a healthy flower business.
For clues and inspiration on how to meet those challenges, you could do worse than take a look at the 60-year-career of Harrison “Red” Kennicott III, AAF—chairman of Illinois-based Kennicott Brothers Company, which has grown under his watch to one of the largest floral distributors in the country, serving ten states with 17 locations.
According to Red, “Personal relationships are what this business is all about. It starts with the customer and their relationship with his or her salesperson. Anything we can do to help build customers through our connections with them—that’s what we see as our main focus.”
To hear Red tell it, wholesale florists are ideally positioned to make connections: “Being in the distribution arm, we’re in the middle between the production and the retail florist. Our reason for existing is to serve both ends.”

Early on, Red realized he had a secret weapon when it comes to customer relations. He met his wife Katie when both were students at Michigan State University; they married the summer after Red graduated in 1959. Red went straight into the family business, while Katie pursued a teaching career for five years—but eventually was drawn into service with Kennicott Brothers as a customer-relations representative.
“That was a job Red made up,” she tells, “back when there were no women in the wholesale flowers business at all. It was perfect for me, because I could do it part-time and visit all the florists.” Already Kennicott Brothers had several branches, including locations in Wisconsin and Indiana. Katie visited florists (who were mostly women) in all those areas. She gathered valuable feedback and established rapport: “Even if they did not become customers, they became friends.”

Back to the Source

On the other end of the supply chain are strong relationships with suppliers. Those come naturally to Red. Kennicott Brothers has roots that go back six generations to a historic nursery, launched by Red’s great-great grandfather in 1836.
Growing up at a time when most cut flowers were still being supplied by local nurseries, “I rode on the school bus with the kids whose fathers grew the carnations and the roses,” Red recalled in a testimonial recorded on the occasion of his presentation in 2013 with the McGladrey Lifetime Achievement Award, which recognizes commitment and service from business leaders in the Chicago area.
When cut-flower production began to shift to South America, Red was among the pioneers who saw the potential of cut-flower imports to grow the market. But he didn’t stop with buying and selling the flowers: he and Katie traveled to Colombia, meeting with growers and shippers, establishing relationships and working with new friends to establish best practices for assured quality and integrity.
When the civil strife that wracked Colombia at the time led to the displacement of a large part of the population, “the flower growers down there took all those people in, housed them and put them to work and educated the kids,” Katie remembers. “We said, we can help.” The Kennicotts organized a clothing drive, with willing help from employees, friends, customers, and industry associates. The clothing drive was only one of many philanthropic efforts, in and out of the industry, that the couple have supported over the years.
Today Red and Katie have a still more intimate connection to flower farms: with their son, Steve, they have launched Kennicott Kuts, which grows peonies through a network of partner farms from Chile to Alaska, thus providing an almost year-round supply. Steve’s daughter carries on the family legacy by running some of the farms in Wisconsin.

The strategy of building a strong business through personal relationships extends to employees as well. In 1992, Red began the process of converting Kennicott Brothers, a family-owned business, to one that became, in 2000, 100 percent employee owned, via an employee stock ownership plan. “Now, when customers call, they are speaking with the owners,” says Red. Employee ownership lends stability as well as a adding to the sense of pride in the company.
Red has even cultivated cordial relations and a sense of unified purpose with competitors. A past president of WF&FSA, he was instrumental in establishing International Floral Distributors (IFD), a group of like-minded wholesale florists who work together to achieve common goals in buying, marketing, and operations.
Friendly relations with competitors certainly played a role in allowing Kennicott Brothers to merge with two large, neighboring wholesale floral distributors: first Vans Floral Products, in 2012, then Nordlie Inc., in 2014—moves that considerably extended the company’s geographic range and purchasing power.

At the heart of Red’s success in building relationships is a determined optimism. It’s the ability to see life, and business, not from a scarcity-minded perspective, but with the idea, “There’s plenty for all if we work together.”
It’s not surprising, then, to learn that Red has been a long-time supporter of efforts to enlarge the pie with a campaign that could increase flower buying in the U.S.—well known to lag behind other developed countries. “We see, especially today, that with more promotion, the consumption of flowers could be doubled,” says Red. “And that would change the game for all of us in the industry.”
Industry-wide marketing campaigns, better-quality flowers and plants, a pool of well-trained and motivated workers: all these have the potential to help grow the floral-industry pie. But all require industry-funded research and investment. Spearheading all these efforts is the American Floral Endowment, where Red served on the board of trustees for ten years and as chairman in 2010-11.

One way to keep the Endowment growing, he points out, is if floral-industry members consider designating AFE as a beneficiary in their will or insurance plan. This is the concept of the Legacy Circle. “If you’re going to leave a bequest, or designate a favorite charity, why shouldn’t that charity be the flower industry,” he says—“the American Floral Endowment?”

Settling that plan in advance, and communicating with family members about it, is one of many things that can give peace of mind in the present and ease the burden on loved ones in the future, he advises.
Born in 1937, Red still works 12-hour days, according to Katie: “He leaves at six in the morning and gets home at six at night.” The reason isn’t hard to find: “What makes me enthused about the business is the same thing that got me enthused when I was 12 years old,” he says: “I love the product, I love the activity, I love the people.” Proof positive that building relationships and looking to the big picture are winning strategies for creating, not just a successful business, but also a long and satisfying life.

Offices and awards for Red

Served on the AFE Board of Trustees from 2001 – 2011 (10 years).  Served as Chairman in 2010-2011.
Other positions of leadership in the industry: president of SAF, of the Wholesale Florist & Florist Supplier Association (WF&FSA) and of the Illinois Allied Florists Association. Red has served on many boards, including those of SAF, WF&FSA, AFE, the Seeley Conference, and Roses Inc.
Prestigious honors include the SAF Paul Ecke Jr. Award and the American Institute of Floral Designers’ Award of Merit.
In 2001, following the footsteps of his father, Harrison Kennicott, Jr., 20 years earlier, he received the WF&FSA Leland T. Kintzele Award.
In 2010, Red once again joined his father — a 1980 honoree — as a member of the SAF Hall of Fame
Click HERE learn more about AFE’s Legacy Circle or to see the complete list of Legacy Circle members.