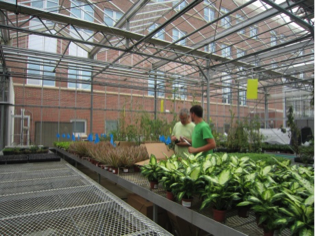 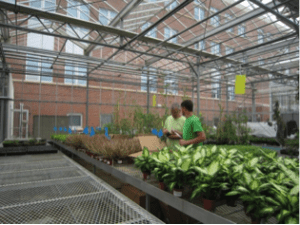 AFE and Altman Plants supplied plants to the Department of Horticultural Science at North Carolina State University for a Floral Plant Give-Away Project (FPGAP) intending to recruit new horticulture students.
During the fall semester of 2012, lecturers Lee Ivy and Lis Meyer, Assistant Professor Julieta Sherk and Professor and Department Head John Dole, Ph.D., began the FPGAP to increase student interest in plants and raise awareness of horticulture as a viable career option.
They distributed 715 plants of multiple varieties to undecided undergraduate students and support members of the school’s First Year College Program, as well as to students enrolled in introductory horticulture classes.
“Students in the First Year College Program by definition are undecided about a career path and are looking for exciting opportunities,” Ivy said. “Those opportunities exist in horticulture and the plant that is given away begins the conversation.” 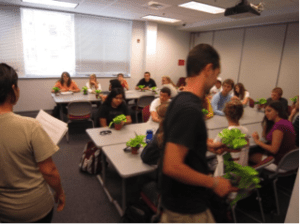 Volunteers distribute plants to students for their dorms.

Horticulture students presented the plants with informative and enticing labels attached. Before giving away the plants, the horticulture students briefly described their experiences in horticulture and their career goals.
The First Year College students were surveyed about whether the project sparked an interest in horticulture, especially as an elective, minor or major.
Although the tracking of the students was still in progress as the FPGAP’s report was written, Dole said the results from fall 2012 were promising enough for the FPGAP to be repeated in fall 2013. More results are expected in 2014.
At least 60 students developed an interest in taking a horticulture class, 50 visited the Horticulture Department website and 44 visited a garden center. Additionally, 11 more students signed up for horticulture classes in the semester following the giveaway than in the semester of the giveaway, which can likely be attributed to the FPGAP.
In addition to the recruitment role, the FPGAP demonstrates the important psychological and physical benefits attached to plants.
“So few folks these days know what horticulture is or the importance of it,” Dole said. “We’ve had enough interest because of the giveaway that we think it will lead to an increased number of horticulture students.”

The full report with more details and photos is available online.