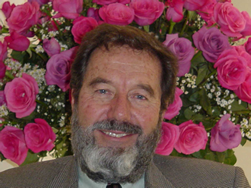 To honor Ernesto Velez, a memorial tribute has been created within AFE. Velez, an AFE Trustee since 2004, died March 21, 2010.
AFE’s Chairman of the Board Red Kennicott established the tribute to honor the deep commitment of Velez and his work in creating an “important bridge in communication and understanding between the growers of Colombia and the entire floral industry in the U.S.”
“Ernesto was always a strong champion of the research funded by AFE,” said Kennicott, of Kennicott Brothers in Chicago. “What made Ernesto special was his great passion for so many different things: the quality of the flowers he grew, the flower industry and its community of people, his family and his country. The flower industry will not be the same without Ernesto.”
His death leaves the industry without its earliest and most vocal champion of the simple belief that the land on which your flowers grow and the people who grow deserve respect and protection. As Chairman of Asocolflores for an unprecedented seven terms, Velez shared that philosophy of social responsibility and environmental stewardship as he tirelessly promoted Colombian flowers and flower growers.
Velez was equally passionate when talking about and working with his wife, Lucie. Together they spearheaded the creation and implementation of the Florverde program. Flowers with the Florverde label carry the guarantee that they have been grown in conditions that meet the highest social end environmental standards.
“Ernesto dedicated most of his time to Asocolflores… fueling ideas and putting forth proposals. He represented Asocolflores with great dignity at both national and international levels, said Augusto Solano, president of Asocolflores. “Ernesto’s passing represents an irreparable loss, not only for his family, but also for Asocolflores and Colombian floriculture.”
Velez served on the production and post-harvest research and public relations committees.

Contributions to the Ernesto Velez Memorial Tribute should be mailed to:

American Floral Endowment
c/o Ernesto Velez Memorial Tribute
1601 Duke St.
Alexandria, VA 22314
AFE is a not-for-profit and all contributions are tax deductible. The family is always notified of a contribution. Memorial tributes are a way to remember and honor industry members, family and friends in a special and lasting manner. A $1,000 contribution establishes a tribute. Once established, contributions can be made in any amount.