The American Floral Endowment (AFE) is an independent nonprofit organization that funds research and scholarships in floriculture and environmental horticulture for the benefit of growers, wholesalers, retailers, allied industry organizations and the general public. 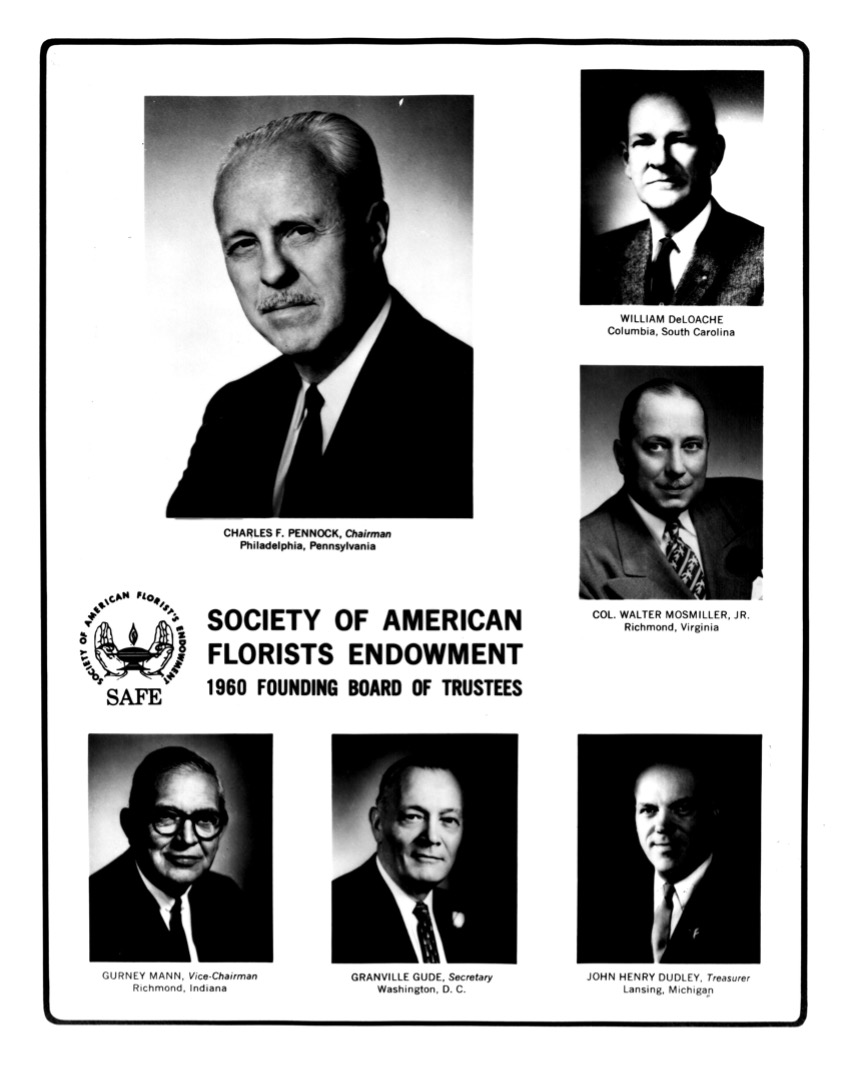 1961: The Society of American Florists Endowment (SAFE) is incorporated. Six trustees administer the organization on a volunteer basis. Charles Pennock is the group’s first chairman; his home in Pipersville, PA, serves as the base of operations. John Henry Dudley is named treasurer. Contributor and financial records are maintained in his office at the John Henry Company in Lansing, MI.

1965: Files and secretarial duties are turned over to Erma Houston (Cook), the Executive Director of the Wholesale Florists and Florist Suppliers of America. Houston is named Assistant Secretary; she holds the position until 1968.

1968: Records and secretarial functions are moved to the Society of American Florists’ (SAF) office. John H. Walker is Executive Director.

1973: The Endowment’s first national phone-a-thon is conducted, raising nearly $500,000 in cash and pledges. The fundraiser is conducted every five years through 2005. Betty Seitz Abrams becomes the liaison between SAF and SAFE.

1973: George Staby, Ph.D., receives funding for his research on the post-harvest cold chain, which ultimately results in the “Chain of Life” program. Gus De Hertogh, Ph.D., retired Research Coordinator for AFE, calls this research “among the most important projects the Endowment has ever helped fund.”

1979: Abrams is named Executive Director. Operations are centralized at her home in Edwardsville until she retires in 1993.

1984: Trustees change the organization’s name to the American Florists Endowment.

1986: Trustees change the name again, this time to the American Floral Endowment.

1988: The Endowment announces it has awarded more than $2.2 million in grant funding since its inception. The Endowment’s corpus exceeds $3 million.

1992: Vic and Margaret Ball give $800,000 to AFE to provide internships and scholarships for students interested in pursuing careers in greenhouse production. The donation represents the largest in the group’s history at the time.

1993: The Trustees purchase a building as the headquarters for the Endowment in Edwardsville. At the time of Abrams’s retirement, Bob Stoeckl is hired as Executive Vice President. Scientific research and educational programs expand significantly. 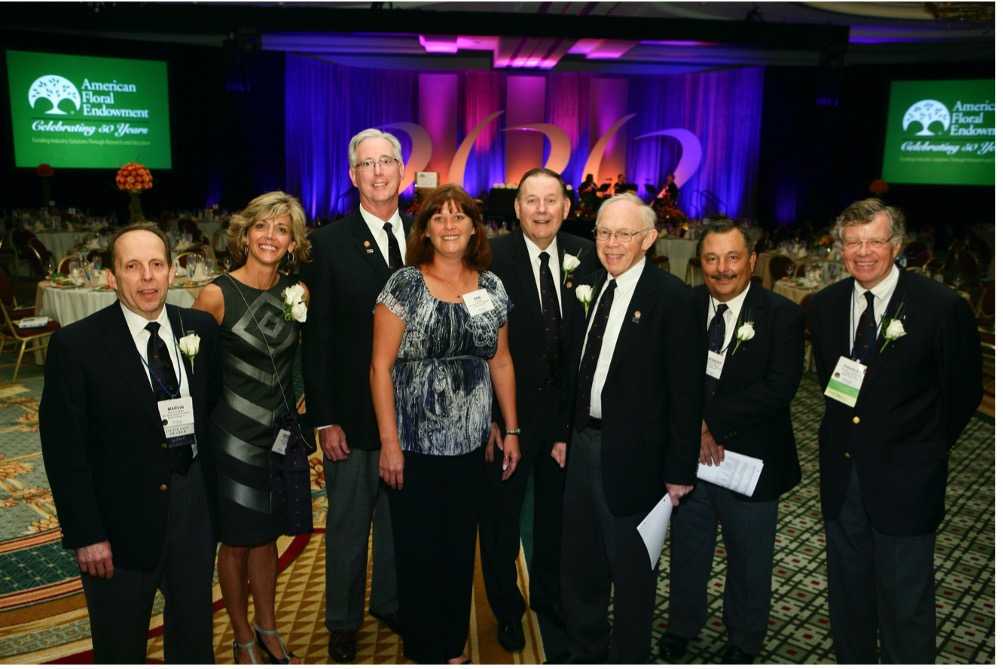 2012: Teleflora presents AFE with a $1 million pledge, the largest in the Endowment’s history. The donation establishes the Teleflora Fund, an unrestricted fund allowing AFE to increase annual funding for additional research or special projects.

2015: The Young Professionals Council (YPC) was established to enable a vibrant group of 21- to 35-year-olds to learn more about the floral industry and contribute to the efforts of the Endowment. A new Business Internship Program is created from the Del Demaree Family Fund to attract emerging business leaders to the floriculture and horticulture industries. New Named Funds include the Altman Family Scholarship Fund, Ball Horticultural Company Fund, Hortica Insurance Fund, and Smithers-Oasis Fund.

2016: Eight new videos were created to spread awareness of AFE and its many programs, including the Vic & Margaret Ball Intern Scholarship Program. Five new named funds are established to advance the floriculture industry: The Yoshimi and Grace Shibata Family Fund, The Blackmore Family Fund, The Tagawa Family Fund, and The BioWorks Fund. In partnership with NC State, launches Floriculture InfoSearch Library, a powerful search engine for convenient and comprehensive access to floral literature, videos, and presentations. In partnership with the Floral Marketing Research Fund, the Consumer Purchasing Study, and Marketing to Gen Y Studies are funded, and the Generations of Flowers Study is released.

2017: A special research fund is established to address the control and management of Thrips and Botrytis with a goal of $1.5 million. Results will reduce losses and provide higher quality flowers and plants.  Three new named funds are established – Egon and Laina Molbak Fund, Scotts Miracle-Gro Fund, and the Arizona Retail Florist Travel Grant Fund.  Growing Further newsletter created especially for grower news and research reports. Sakata Seed teams up with AFE with a $10,000 gift match during 40 Days of Summer Giving to celebrate Sakata’s 40th anniversary raising $30,000.

2018: In its first year of promotion, $800,000 in pledges were raised for Thrips and Botrytis Research Fund. Kickoff of #FlowerMarketingMonday series with over 100 new short videos promoting flowers from the Floral Marketing Research Funds’ #FlowerLoveVideos contest. New named funds established including the CalFlowers Scholarship Fund, and the Long Island Flower Grower Association Bob Gunther Scholarship Fund, bringing the total number of scholarship funds to 28.

2020: The impact of COVID-19 is felt throughout the world.  AFE shifts focus on providing COVID resources for industry, while committing funds to continue research, scholarships, and internship programs to help the industry sustain. AFE launches new Career Center to address the labor challenges and to provide the first platform to connect floral businesses and job seekers. Vic & Margaret Ball Intern program celebrates $1 million in scholarship funding since its inception in 1992.  The first virtual dinner held raises a record amount of donations in excess of $80,000 for AFE’s annual fundraising event.

Check out our 60th Anniversary Historical Photo Gallery at https://endowment.org/through-the-decades/