Service Is Tradition for Big-Picture Pioneers 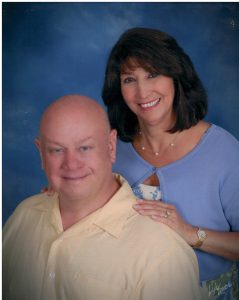 Jack and Carolynn Van Namen. Third in a series honoring members of AFE’s Heritage Circle. Created to recognize persons who have made provision for a planned gift to AFE, the Heritage Circle celebrates their significant contributions, enriching our past and securing our future. For more information, contact Debi Chedester at (703) 838-5211 or visit endowment.org/heritage-circle/.

Growing up in a floral industry that was traditionally segmented, with growers, wholesalers and retailers each performing a different function (often not knowing much about what the others did), Jack Van Namen nonetheless saw the potential for doing business a different way.

Over the course of several decades, he worked alongside his father and company founder, Jacob Van Namen, to lead Vans Inc. into a new era of wholesale floral distribution, achieving remarkable growth at a time when many others were experiencing setbacks in a fast-changing industry.

Key to his success was a vision of the big picture: vertically-integrating Vans with its own supply chain for both fresh flowers and floral supplies, sometimes cooperating with competitors in order to do so. Many factors contributed to that strategy, among them Jack’s participation in and contribution to floral industry organizations like the American Floral Endowment.

Following his father’s example of giving back to the industry, Jack has served as president of WF&FSA as well as on various committees of both WF&FSA and the Society of American Florists. He has also participated on the boards of state and local floral associations and within his church and community.

“When you are involved with national associations, you really have your fingers on the pulse of the industry,” says Jack, who served on AFE’s board for many years, continuing a tradition his father had established. Both Jack and Carolynn and Jack’s parents, Jacob and Rita Van Namen, are members of the AFE Heritage Circle. Jacob Van Namen passed away at age 90 in 2013.

Out of Little, Much

Jack was seven years old when he arrived in the United States from the Netherlands with his parents and younger brother John, in 1955. Sailing into the New York harbor in February, Jack recalls that “it was very cold, with icy rain. But our parents wanted us to see the Statue of Liberty, and I’ll never forget that sight.” 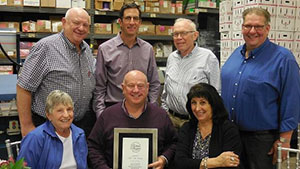 The family settled in Chicago, where Jacob worked at various jobs. After a few years, he was hired by two brothers of Dutch heritage to join their small wholesale florist company as a driver and salesman. Within five years, he bought out the brothers, and Vans Wholesale Florist was born.

During the next ten years, Jacob bought out two other wholesale florists, one in downtown Chicago next door to Kennicott Brothers, which became his greatest competitor.

From Lemons to Lemonade

Necessity became the mother of invention for Vans. At that time, most wholesalers sold flowers on consignment, paying local growers only for what was sold. When Vans Wholesale Florist entered the tightly knit Chicago wholesale floral market, many growers were unwilling to supply the newcomer with flowers.

“The two entrepreneurs became very close friends,” Jack remembers, “to the point where in the late ’60s, Shimi and my father agreed to help each other’s next generation learn all aspects of the business, saying, ‘You teach my sons the Japanese way from the grower’s viewpoint, and I’ll return the favor from the wholesaler’s position.’ Shimi’s sons ended up working for a summer at Vans, while John and I worked in California for two summers. Both Shimi and Jacob wanted their sons to be grounded in all aspects of the floral supply and distribution chain and exposed to cultures and traditions outside their own.”

At a time when floral imports were still a novelty, Vans became one of the largest importers of cut flowers from the Dutch auctions. Over the years, it helped that Jack maintained his knowledge of the Dutch language—mainly thanks to his mother. “My father said, ‘We are in America and we will speak English,’ but my mother still spoke Dutch at home,” he recalls. Being able to speak his native language gave him a competitive advantage when dealing with their Dutch suppliers.

Over the next 30 years, the company continued to expand, acquiring and building other wholesale distribution facilities, and to integrate vertically, becoming owners or partners with growers in The Netherlands, Hawaii, California, Florida, Central and South America and Mexico.

“We ended up with ten locations in five states and 12 business units,” says Jack, prior to the company’s merging with Kennicott Brothers in 2012.

In the process, Vans helped to redefine what it meant to be a wholesale distributor in the floral industry, anticipating new developments in the industry and in the economy at large. The company became a pioneer in importing fresh flowers globally as well as factory-direct sourcing from the Far East for floral supplies and decorative items.

One of the first companies in the industry to introduce a computerized inventory management system in the mid-‘70s, Vans also led the way with innovative marketing practices and top-notch design shows and educational seminars. The company hosted internationally known floral designers who brought the latest design techniques and trends to Vans customers.

Around that same time, Vans formed a business division called Navco, which focused on farm-direct floral sourcing. “We were receiving a minimum of three shipments per week from the Dutch auctions, along with product from Italy and dendrobiums from Thailand,” says Jack. “Vans also became a regional redistributor for Agrexco,” the Israeli agricultural export company. “We were engaged in sourcing product from many different global suppliers.”

In the early 2000s, Jack agreed to oversee the marketing operations of a consortium of flower producers affiliated with Vans in the main growing regions of central Mexico. They shipped flowers directly from the farms in wet-pack containers and climate-controlled trucks both to big-box retailers within Mexico and to wholesale distributors and mass markets in the United States.

At a time when retail and wholesale florists alike felt squeezed by competition from mass-market retailers, Vans invested in a farm-direct system that enabled Jack to say to mass-market buyers, “We are the farm.”

“As a young teenager I already knew I wanted to go into the family business with my father,” says Jack. Tailoring his education to his future career, he graduated with a degree in horticulture and marketing from Michigan State University and also took post-graduate courses at the University of Illinois-Chicago. He worked in various capacities throughout the company before joining the corporate team at Vans.

Many others who have made their mark in the floral industry grew up in a family business—which can be both an advantage and a challenge. “When my brothers and I came on board, my father would say, ‘I’m going to let my young tigers explore the areas that we need to grow the business in,’ ” Jack remembers.

“We certainly had our moments between father and son,” he continues, “but what I will always appreciate about my father was that when I came up with an idea for market development, he never said no. He would say, ‘That sounds good, but how fast are you going to pay me back?’ So he gave encouragement but also held me to a very high standard of accountability, which he made sure to instill in all of us.”

Industry involvement was another aspect of Jacob Van Namen’s philosophy that he passed on to his sons. It was because of his industry participation that Jack met his wife, Carolynn, who was working at the time for the Wholesale Florists and Floral Suppliers Association in Alexandria.

“That was my first job right out of college,” says Carolynn, at a seminal moment when the association broke away from the Society of American Florists and held its first independent convention.

“There was so much happening in the industry in the early ’70s,” Carolynn recalls. Together with her boss, Executive Director Sue Haynes (later, Sue Wolfe), she helped to revamp the WF&FSA newsletter into a glossy four-color magazine called The Link—a rebranding that relied heavily on Carolynn’s skills and talent as a writer. She later contributed the section on wholesale floristry to the book, A Centennial History of the American Florist, published by Florists’ Review.

Carolynn’s time at WF&FSA also saw the launch of the WF&FSA Trade Fair and the Young Executives program, in which Jack was an early and active participant. The two met at the first WF&FSA convention in the summer of 1971.

“My boss ‘intervened’—in a positive way!—to bring that meeting about,” says Carolynn. A few months later, she moved to Chicago from Washington, D.C., and the pair were married the following May. “And here we are, 47 years later!”

She first worked as an associate editor at Teleflora magazine before becoming involved in the family business: “My father-in-law told me that everyone has to use their talents,” Carolynn recalls. At Vans, she was responsible for trade advertising and promotions, which also included organizing the design events at the wholesale houses. She sought to take a more active role at the design shows, so she enrolled in a PFC-I commentating course at American Floral Services. Through managing the shows and attending industry events, “I got to know industry legends like Eulalah Overmeyer and Bobbi Ecker and met so many fantastic people,” she remembers.

“I’m very blessed that I ended up marrying someone already familiar with the industry,” says Jack, “who has been my greatest supporter throughout my career. My weakness was her strength. Over the years I have relied very much on my partner and soul mate, who encouraged me to venture out into the unknown.”

Investing in the Future

As a dynamic couple who have embraced innovation and adaptation to change in our ever-evolving industry, it’s only natural that Jack and Carolynn would be looking to the future with their participation in AFE’s Heritage Circle.

Asked about what he believes is ahead for the industry, Jack says, “There will always be a need to supply the consumer with fresh flowers and decorative products. So yes, there’s an opportunity for those who seek it. It will require initiative and creativity to determine where the floral supply chain is going. But we also need the research projects being funded by AFE and AFE’s support for the next generation. The next crop of students and future leaders is going to bring new concepts to the industry if we can give them a chance. Hopefully, they will bloom where they are planted.”