Giving Back Through AFE’s Legacy Circle 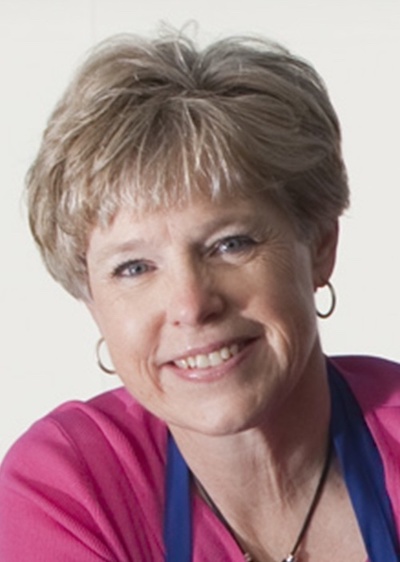 Shirley Lyons, AAF, PCFI, recalls that during her tenure as president of the Society of American Florists, other retail florists would sometimes approach her shyly at industry events.

“We’re just a little store,” they would start out by saying.

“I’m just a florist like you,” Lyons would reply. “I wear an apron every day.”

And if those florists could see pictures of the very first storefront occupied by her shop, Dandelions Flowers & Gifts, back in 1974, they would have a good laugh, she adds. It was all of 250 square feet. Today, it is the biggest flower shop in its market area.

While Lyons retired and sold the business in April 2018, she remains proud of that success—and committed to giving back to the industry that she says gave her so much.

Not long ago, Lyons and her husband, Terry Lyons, joined AFE’s Legacy Circle when they included a bequest to AFE in their estate planning.

“We are not wealthy,” she cautions. “If you’re a retail florist, when you look at some of the other industry players who are members of the Legacy Circle, you might think, ‘That is not in my league.’ But small contributions from many florists can add up and make a big difference. And, planning for a bequest is actually one of the easiest ways to give.”

From Banking to Flowers 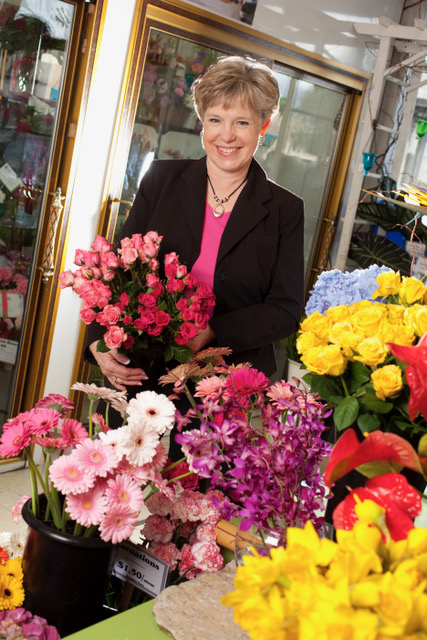 Lyons was 21 years old when she got started as an entrepreneur. At that tender age, she had already been working for two years—in the banking industry. From banker to retail florist might seem like quite a turnaround, but it was a gradual move, and one prepared by the home she grew up in.

“My mother was very creative, so all our life we were crafters,” she remembers. “And my father was a businessman—a serial entrepreneur. So, I grew up with both of those influences. I enjoy working with my hands, but I also like numbers. And I enjoy the business of business.”

At first, she continued working in banking, with the flower business as a sideline. She and Terry worked nights and weekends to sell flowers at one of the Saturday farmer’s markets that were then a relatively new phenomenon.

“But it grew,” she recalls, “because people commented, ‘We like what you’re doing.’ So, we thought to ourselves, ‘All right, maybe we should open a store.’” Lyons’ father, Cal Husbands, helped to remodel that tiny storefront, building some of the walls and constructing the first floral cooler from scratch. Lyons gives her dad much credit for providing the support and inspiration that helped get the fledgling business off the ground.

As every florist knows, owning and managing a flower shop is already like having more than one job. But around this time, the Lyonses were also starting a family. How do you manage both?

“You feel like you’re spinning plates on sticks, and you just try to not break them all at once,” says Lyons, laughing. “We have three children, and somewhere along the way, we managed to raise them into responsible citizens. I feel like that’s our greatest victory.

“We brought them to work—and they loved it,” Lyons continues. In the end, taking part in the family business provided valuable life lessons for her children, she feels, even though they ended up taking different career paths.

“You have to keep going, so you juggle the best you can,” she remembers. While Terry shared parenting responsibilities in a way that made it possible for Shirley to build the business, she also managed to coach soccer and serve on school boards. “You want to achieve balance to the point where your family thinks you have it—even though you’re a little frantic internally.”

As if running a business and raising a family was not enough, Lyons eventually took on extraordinary service commitments, both to her local community and to the floral industry. 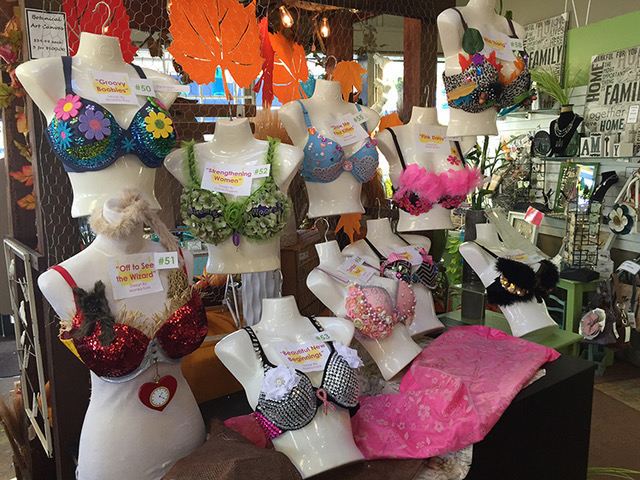 In 2010, Lyons and her daughter, Toviana Jackson, were inspired by an idea they read about in SAF’s Floral Management magazine to launch a fundraiser called Bras for Cause. The concept was simple: Invite creative individuals to decorate a bra, put their creations on display, and encourage the community to donate by voting for their favorites.

It was important to Lyons that the money raised stay within the local area. As a benefit for the Oregon Cancer Foundation, Bras for Cause was designed both to raise awareness around breast cancer and to provide assistance to patients undergoing treatment right there in Lane County.

“Our first year it was very small,” Lyons remembers. “Then in just a few years, it grew into the largest fundraiser that our cancer center has.” That’s what makes the experience of giving so powerful and so rewarding, she says—as with AFE’s Heritage Foundation: “Even something that starts small can gain speed and momentum as others join in.”

In 2017, the Oregon Cancer Foundation honored Lyons with its inaugural Sparrow of Hope award for her dedication to the cause.

Supporting her own community in a different way, Lyons jumped in early on as an active member of the floral industry, culminating in terms as president of SAF (2013-15) and as chairman of the SAF board (2015-17). In both cases, she was the first woman to hold that title. 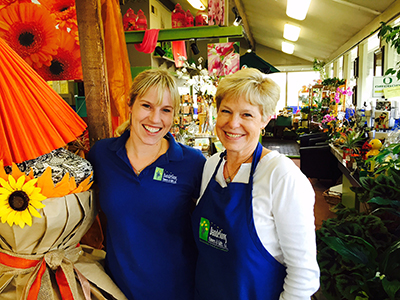 “It’s a bit of a cliché, but I feel like I gained more than I gave,” she says. “Very few industries have multi-channel trade associations like this, where retailers come together with wholesalers and growers. When you attend a SAF convention or other event, you come home with new industry contacts—people you might never have an opportunity to meet otherwise that you can now call on with questions or for advice.”

“This industry is willing to share in a way that some others are not. And so, building on those connections, you can build your business, but you also build your own personal strengths. It’s enriching on every level.”

Indeed, community service and business success have gone hand in hand for Lyons and for Dandelions Flowers & Gifts. The shop has been among the top three in Readers’ Choice awards from the local newspaper every year since the beginning. In 2011, the Eugene Chamber of Commerce recognized Lyons as Businesswoman of the Year.

On the floral industry side, Dandelions was awarded the 2010 Retail Florist Marketer of the Year by the Wholesale Florist and Florist Supplier Association (in conjunction with Florists’ Review magazine). And in 2018, the business was made the recipient of the fourth annual Tom Butler Floral Retailer of the Year Award from Teleflora, in recognition of both community service and “meaningful guidance to fellow florists.”

No Gift Is Too Small 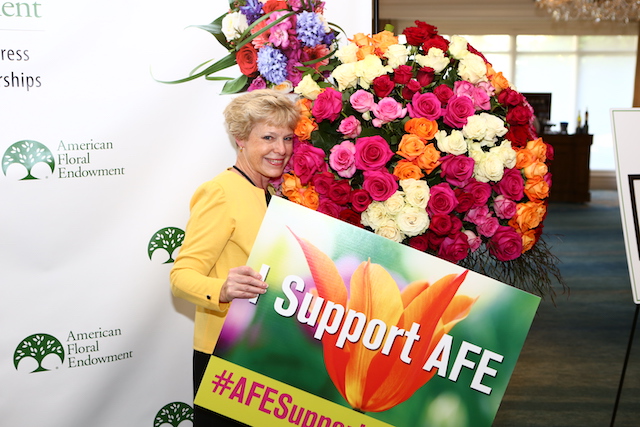 The opportunity to be at SAF Conventions and to attend the American Floral Endowment Dinner has brought home to her the impact of the Endowment, Lyons says: “Often, we will hear from the winner of a recent scholarship, or about sponsored research that really made a breakthrough. That helps you appreciate very tangibly what a difference the Endowment makes.”

AFE’s scholarship and internship programs hold particular meaning for Lyons: “I’ve graduated several kids from college, and when someone got a $1,000 scholarship, they were over the moon. It encourages them to go forward in a particular direction. These scholarships and internships that AFE is funding are making a difference for young people right now, helping them get an education that they can then immediately put to use right in our industry.”

This is why she encourages other retail florists to give, whether in estate planning or making a contribution right now, even if the amount is small: “It could be $5,000 or $500, but if 10 or 50 florists bequeath a similar amount, their gifts add up. Even a modest annual contribution of $50 or $100 accumulates in volume. It’s a wonderful way to leave a legacy that will grow and grow.”

To make a tax-deductible contribution to AFE in any amount, click here.

Fourth in a series honoring members of AFE’s Legacy Circle. Created to recognize persons who have made provision for a planned gift to AFE, the Legacy Circle celebrates their significant contributions, enriching our past and securing our future. For more information, contact Debi Chedester at (703) 838-5211.