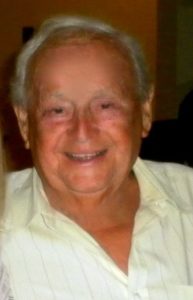 A successful businessman from Holland, Mr. Van Namen immigrated to the United States in 1955 with his wife Rita and two sons, Jack and John. The family settled in Chicago where Mr. Van Namen worked a variety of jobs until being hired by DeBoer Wholesale Florist.

By 1960, he was a partner in the business and soon assumed ownership of the company, which became known as Van’s Wholesale Florists. “Van” grew the company from a single location in the Chicago area to 12 distribution centers in six states by the 1990s. As his family grew, his sons and daughter followed in their father’s footsteps to become active in the business, along with some of his grandsons in later years.

Mr. Van Namen believed strongly in sharing his time, talent and resources in his community and the floral industry by supporting many nonprofit and faith-based organizations. He served as an AFE Trustee, as well as on committees and boards of the Wholesale Florist & Florist Supplier Association (WF&FSA) and the Society of American Florists (SAF). WF&FSA honored him with the Leland T. Kintzele Distinguished Service Award, and he received numerous other awards and recognitions throughout his career.

Mr. Van Namen promoted higher education as a trustee of Trinity Christian College in Palos Heights, Ill., where he contributed to several building projects. He also supported the horticulture program at Michigan State University with contributions to the International Horticulture Gardens. In addition to his industry achievements, Mr. Van Namen was designated as an Officer in the Order of Orange-Nassau, the Netherlands’ highest civilian honor, for his role in promoting and furthering Dutch-U.S. trade relations.
Mr. Van Namen remained active in the business and influential in the industry into his early 80s. He is survived by his devoted wife of 65 years, Rita; was a loving father of Jack (Carolynn), John (Tracy), Joyce (Rick Mast), Jim (Barbara); dear father-in-law of Ineke and Cyndy; cherished grandfather of 13 and beloved great-grandfather of 15; preceded in death by a son, Tony, and a granddaughter, Jacqueline Van Namen Coakley.

Mr. Van Namen and his wife established the Jacob and Rita Van Namen Marketing Scholarship in 1997. Administered by AFE, this scholarship is intended for knowledgeable and creative individuals with an interest in agribusiness marketing or the distribution of floral products. Friends and colleagues can make a memorial gift to the scholarship or to Trinity Christian College, which Mr. Van Namen supported with his time and resources for many years.