New Fund Honors the Legacy of Yoshimi and Grace Shibata

AFE announced the establishment of the Yoshimi and Grace Shibata Family Fund, honoring the late flower grower and wholesale florist Yoshimi “Shimi” Shibata and his wife Grace. Shimi passed away peacefully at home on Oct. 31 surrounded by family. The floral industry pioneer was 100 years old. 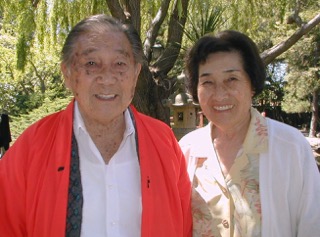 Founded by a generous contribution from the Shibata family, this new named fund honors the lifetime legacy of Shimi and Grace and their accomplishments in the floral industry.
“Shimi and the entire Shibata family have always been great champions of the industry,” said Executive Director Debi Aker. “We are honored that the family chose to establish this new fund honoring Shimi and the Shibata family through AFE.”
Shimi was a past president of the Mt. Eden Floral Company, formerly Mt. Eden Nursery, based in San Jose, Calif. The renowned floral industry leader led the company for more than 55 years. Other related companies owned and operated by Shimi are GM Floral Co and the California–Florida Plant Co, which was a joint venture with Sumitomo Corporation of Japan.
“We are grateful that [Shimi] had a distinguished and fulfilling career in the flower industry that he loved so much,” said Robert Shibata, one of his sons and current president of Mt. Eden.

Shimi had many leadership roles in his own companies, throughout the flower industry and in the community. To name a few, Shimi served on the AFE Board of Trustees, as well as on the boards and executive committees of the Society of American Florists (SAF), Wholesale Florist and Florist Suppliers Association (WF&FSA), Roses Inc. and the California State Floral Association. He was elected president of WF&FSA in 1972, and in 1976 he was inducted into SAF’s Hall of Fame. He also served as a board member for the Sumitomo Bank of California for 14 years and for the California State Chamber of Commerce for 10 years.
In addition, Shimi released his memoir “Across Two Worlds: Memoirs of a Nisei Flower Grower” in 2006. This year, the California Association of Flower Growers and Shippers (CalFlowers) awarded him with the 2015 Distinguished Service Award, recognizing his leadership, strategic thinking and contributions to the floral industry in California.
Shimi married Grace in 1947 and they had three children — Naomi, Robert and Michael. His grandson Alex began working for Mt. Eden in 2011, so his legacy continues into its fourth generation.
For those wishing to honor Shimi’s legacy in the floral industry, contributions to the Yoshimi and Grace Shibata Family Fund can be made through AFE’s online donation page or by sending a check made payable to Yoshimi and Grace Shibata Family Fund/AFE to: