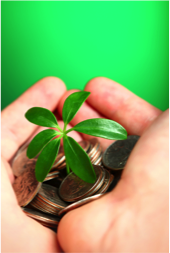 Brooke Gasteyer, a University of Wisconsin-River Falls senior, long dreamed of traveling to Europe for a horticulture internship. Her dream became a reality when she was awarded the 2013 Markham-Colegrave International Scholarship, funded by AFE and the David Colegrave Foundation.
“Working in another country opened my mind and gave me more perspective while broadening my horticultural experiences,” Gasteyer said. “Spending five months in Europe certainly had an impact on me and will continue to in the future.”

German wholesale nursery and internship host Gärtnerei Umbach put her straight to work with primulas and violas, which the nursery abundantly produces in many varieties. Later, she began planting new plants and taking goji cuttings.
In an effort to learn more about European horticulture, she toured prominent businesses, like a marketing organization called Landgard that connects wholesale growers with retailers. Landgard receives a portion of the profits if the wholesalers sell their plants, and they are returned to the wholesalers if they do not sell.
“I was amazed at the wide variety of plants they had there!” Gasteyer said.

She also had the opportunity to visit German nurseries and greenhouses, one of which used a large machine that was different than anything she had seen in the U.S. The machine could fill containers with soil, plant plugs in the containers and even plant multiple plants in the same container.
On a trip to England, she visited the Kew Royal Botanic Gardens, the Hampton Court Palace Flower Show and the leading flower seed breeding company Floranova.
“During my time at Floranova, I enjoyed learning a lot about plant breeding,” she said. “I thought it was really interesting to learn about the various processes involved.”
University of Wisconsin-River Falls horticulture professor and student advisor Terry Ferriss, Ph.D., saw the internship confirm Gasteyer’s commitment to the green industry.
“Brooke used this international experience as an opportunity to push herself professionally, culturally and personally, and it paid off with great dividends,” Ferriss said. “What Brooke learned about the industry, European culture and herself would never have happened if she had not taken that leap of faith to go abroad. It truly was a life changing experience.”
Learn more about her experiences by reading Gasteyer’s full internship report.
The Markham-Colegrave International Scholarships provides an annual exchange of students between the U.S. and the United Kingdom, alternating between the two countries. U.S. students should apply by May 1 for the 2014 scholarship.
Applications for all 20-plus AFE scholarships are also due by May 1 each year.