Nearly $2,000 was raised at the second annual fundraising dinner for The Tom Butler Family Fund, honoring the legacy of the late Tom Butler.
The dinner was held on Tuesday March 14, 2017 at Tom’s favorite restaurant – The Capital Grille in Washington, D.C. – following the Society of American Florists‘ Congressional Action Days (CAD). 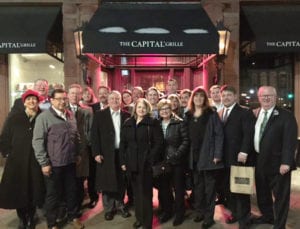 Twenty-two industry members attended the dinner, which was organized by AFE supporter and longtime friend of Tom Butler, Tim Galea.
“It was a fun evening with good food, good friends and great memories of our friend and mentor Tom Butler,” said Tim Galea, President of Norton’s Flowers & Gifts.
“While the financial contribution is our tangible method of honoring Tom’s commitment to the Endowment, the real goal behind the annual dinner is to remember, respect and spread Tom’s legacy,” he said.

“It is my hope, that by sharing this dinner every year at CAD, we keep Tom’s friendship, virtue and leadership qualities a living story that florists, wholesalers and growers will know about, understand and value in future generations.”
The annual fundraising event was initiated in 2016, and the two-year contribution total has reached more than $4,100.
A special thank you to those who attended the event, and those who were unable to attend but donated to The Tom Butler Family Fund.
And thank you to Teleflora and DESIGN MASTER color tool, inc. for the additional contributions.
Make a contribution to The Tom Butler Family Fund here (be sure to specify the Tom Butler Fund).