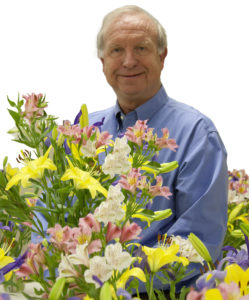 AFE has appointed Terril A. Nell, Ph.D., as its new research coordinator to oversee the Endowment’s research funding and provide counsel to industry researchers. Nell is professor emeritus in floriculture at the University of Florida (UF) and developed the UF postharvest program in 1983, which he credits AFE funding for making possible.

“AFE-supported research has directly benefited the floral industry over the past 53 years,” Nell said. “I share the organization’s quest to provide better scientific information to growers, wholesalers and retailers, and I look forward to working with this organization’s board to advance its goals in the future.”

Nell was appointed following the retirement of Gus De Hertogh, Ph.D., AFE research coordinator for the past 15 years.

Nell served as chair of the UF Environmental Horticulture Department from 1991-2012 and was a floriculture professor from 1977-2012. His research program concentrated on the production and postharvest handling of flowering potted plants and fresh cut flowers, the results of which have led to improved flower and plant longevity. A highly respected care and handling expert, Nell co-authored the Flower and Plant Care Manual produced by the Society of American Florists (SAF).

He was the first academic president of SAF from 2003-2005 and was inducted into the American Academy of Floriculture, the Florida State Florists’ Association Hall of Fame in 2005, the Florida Nursery, Growers and Landscape Association Hall of Fame in 2011 and more. He is a member of the U.S. Department of Agriculture’s Specialty Crop Committee and a board member of the National Foliage Foundation.

For the past 25 years, he has served as a domestic and international industry consultant for growers, wholesalers, and retailers. Upon his retirement from UF in 2011, Nell and his wife, Cathy, moved to Brevard, NC.