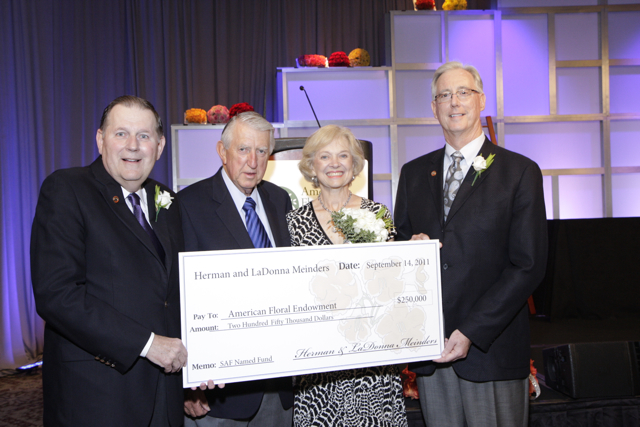 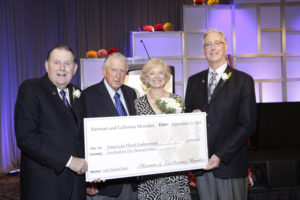 AFE recently held its 2011 fundraising dinner on Sept. 14 in Palm Springs, Calif. More than 30 organizations in the floriculture industry helped sponsor the event, which was held during the Society of American Florists’ annual convention. The fundraising dinner paid tribute to the generous industry members and organizations that have supported AFE. 185 industry members attended the event, which was hosted by Tom Butler, Chairman of Teleflora and AFE’s Board of Trustees and Paul Bachman, of Bachman’s and AFE’s Chairman-Elect.
The fundraising dinner recognized BloomNet, Altman Plants, the Stuppy Family Foundation, Syndicate Sales and Kitayama Brothers/Greenleaf Wholesale for advancing to new giving levels.
A special recognition was presented to Ms. Margaret Ball and Ms. Lee Phillip Bell whose families are part of AFE’s $500,000 Club. Both families were recognized for their continued support and generous donations to AFE, which have been used to fund floriculture programs to aid students.
The Phillip family surprised AFE with an additional $25,000 donation to the James and Helen Phillip Scholarship, from Russ Phillip, fulfilling his commitment to AFE’s Legacy Circle. The Legacy Circle is a group of 28 industry members who have made a commitment to planned giving to AFE. The AFE Legacy Circle also welcomed new members Jacob and Rita Van Namen.
The 2011 fundraising dinner concluded with the presentation of a check for $250,000 from Herman and LaDonna Meinders, which will be used to create AFE’s first unrestricted named fund. Herman Meinder, a long-time supporter of AFE, is founder and Chairman Emeritus of American Floral Services, one of the largest floral wire services that merged with Teleflora in 2000. Herman and LaDonna have been making personal and corporate contributions to AFE since 1980 and they have been instrumental in many philanthropic projects and educational institution endowments. The Herman and LaDonna Meinders AFE Fund will contribute to AFE’s Corpus and provide assistance for the industry’s most critical needs.